I arrived in Salvador de Bahia on the first ever nomad cruise from Spain. I stayed in lively Salvador for 2 weeks, then moved to beautiful Florianopolis for another week and spent the last week in exciting Rio.

I stayed in the simple but very friendly Porto Salvador hotel in Barra, right by the famous light house, boulevard and lovely beaches. A very local and lively area. Even at night there’s people on the boulevard and beach swimming, dancing, playing, running, flirting, talking, eating, having fun. 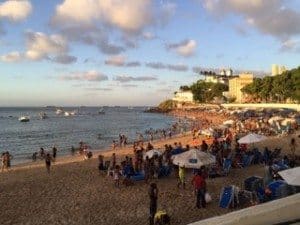 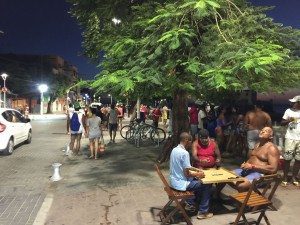 This was my second visit to Brazil: in 1998 I travelled as a backpacker, this time as a digital nomad. I found the perfect combination of productivity and fun. After an afternoon of digital nomad work in my air-conditioned hotel room, I would go for a swim or run by the beach, followed by dinner with two other location independent entrepreneurs. We even created an e-course about how to be successful and productive in challenging circumstances.

However, there are some limitations to being in one the most dangerous cities of the world. Locals say they get robbed once a year and prepare by carrying only an old phone and very little cash. Seeing Salvador without a phone/camera was weird. I felt handicapped, especially not being able to take pictures. How could I share the amazing things I saw? I decided to be creative and made some sketches of the weirdest ‘encounters’… 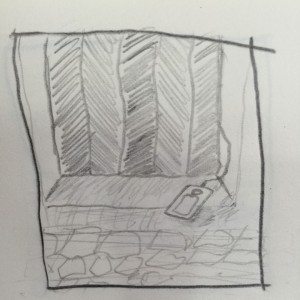 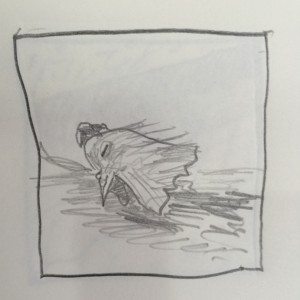 1) At night in the old town (danger!) I saw this iPhone being charged through a closed door. The phone was just lying there in the street… Especially since we had been advised not to carry a phone, because it would be stolen as soon as anybody saw it, this was the weirdest thing ever. Turned out there were two security guards across the road who were either guarding the phone or charging it…

2) Against all odds I took a walk on a deserted beach. I saw traces of Candomblé ceremonies: remains of fires, white cloth, flowers. Then I came across this severed chicken head and I knew I was probably not supposed to be there. 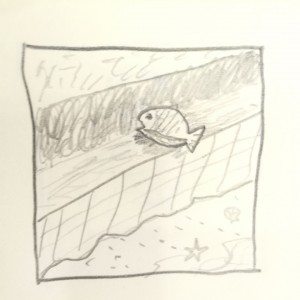 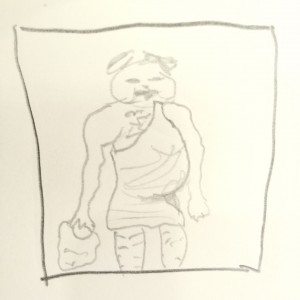 3) I did walk onto the deserted beach to find a rather large fish perched onto a 1-meter high ledge. It looked just as strange as my drawing. How did the fish get up there? A huge wave? Did a fisherman leave it? Was it part of a ceremony? I checked if it was still alive (nope) but got no clues as to how it got there. Weird.

4) Descending from the road onto the secret beach, I passed a man in red shorts taking a sh*t in the bushes… I walked quickly onto the beach, saw the chicken head and the fish and found a quiet spot to meditate on all this weirdness. The man in the red shorts walked past me and stopped 100m further on. I could see he was up to something, but had no idea what he was doing. He fussed with a plastic bag and again was somewhat hiding in the bushes. Then he started walking back towards me. Only this time he was wearing an old, broken women’s dress, stretching unappealingly across his big belly. He carried his red shorts in the plastic bag. He did not look at me when he passed me, as if I knew his secret… He did not look happy in his dress, only ashamed and miserable. Then why wear it? Some questions will never be answered…

After a few days I got more comfortable with the situation and occasionally carried my phone, so luckily I do have some pictures!

Pelourinho is the beautiful old center of Salvador. Unfortunately it is also very touristy and therefore pretty dangerous. This free walking tour is really recommended. Don’t miss the house where Michael Jackson filmed his famous video for ‘They don’t really care about us”. 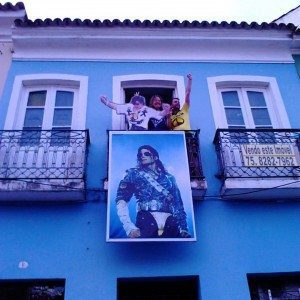 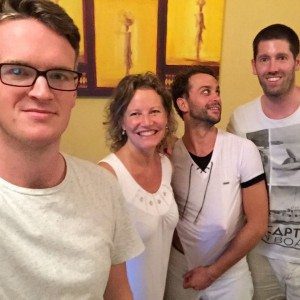 On a private tour with some friends, we got invited to a real Candomblé ceremony. We had to instantly buy white clothes. Not too happy about our fashion show, but the ceremony was amazing. The drums still ring in my ears.

Foodies: try the moqueca soup, made with ground cashew, seafood and lovely spices. There are many ‘comida a quilo’ restaurants, where you can select home cooked food from a buffet and you pay by the weight of your plate. Of course you drink dirt-cheap green coconuts and caipirinhas from one of the vendors on the boulevard.

Unfortunately my watch got stolen from my hotel room, so I got to experience the other side of Brazil as well. ‘Don’t worry, there are surveillance cameras in the hallway. We’ll check the footage and see who entered your room’ promised the hotel. But the next day was Sunday, then there was a holiday, then they lost the pin code of the system and by the time the security firm was ready to watch the footage, it had already been overwritten. The hotel manager was very nice and arranged a taxi to take me to the tourist police. Guess what: the tourist police was on strike that day. After some discussion (I was leaving the next day) they decided to help me out, but they did it soooooo slowly. Word by word, letter by letter had to be weighed and discussed. And then their chef had to sign, but she was just about to go out to lunch (and thus made me wait for three more hours…). Frustrating, but an interesting experience. Everybody is so friendly and they all wanted to chat because I speak some Portuguese.

While I was waiting, the street police brought in a dirty street kid who robbed a tourist, with the screaming tourist lady trying to hit him. Street police and office police don’t work together apparently. The office police said they were on strike and couldn’t take the kid. The street police then took the kid away and I asked ‘where are they taking him?’ Answer: nobody knows. No wonder he looked so scared…
Two months later I got an email from the hotel saying they had found my watch in a pillow case brought back from the laundry service! So honest and nice of them and so great to get my watch back!

Many people say this is the most beautiful city in Brazil and I kind of agree. Florianopolis is a peninsula with 44 beaches. Each beach is different: for walking, surfing, sunbathing, eating, nature, trendy, family etc. People are more European, it has a holiday feel and it’s much safer than Salvador.

I stayed at Lago de Conceçao, a very nice and safe area where you can just walk to the food truck parking (good food, nice atmosphere!), to various restaurants and shops and can even hitchhike to the beaches. One of my favorite beaches is Joaquin beach, with huge prehistoric boulders, where people come to watch the sunset. 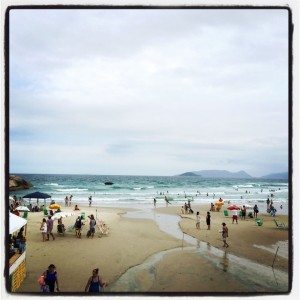 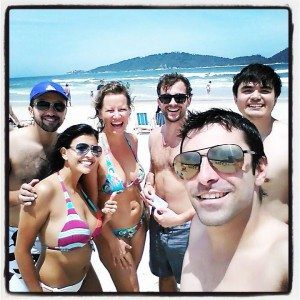 For Startup Grind digital nomad Bjorn and I gave a presentation in the beautiful Impact Hub co-working space. The pre-presentation briefing was…on the beach! We met so many friendly people and wonderful entrepreneurs. Happy to contribute to the local startup scene.

Interesting detail 1: The days before we told some people we were giving a presentation: many were interested and said they would come. Nobody actually asked what the presentation was about!

Interesting detail 2: when you go out to eat in a group, the restaurant bills are automatically split. Often each person gets a numbered card on the table, so the receipt indicates exactly what you need to pay. Very clever!

When flying into Rio airport my plane passed the famous Christ statue… Sightseeing by plane, check! My Airbnb place was a rare find: a €15 private room in an old house in quiet and lovely Santa Teresa. In fact I got an entire floor including living room and balcony with great views. The owner is a retired professor working on a history book about a war in the south of Brazil in 1890. This situation feels like a trip down memory line. 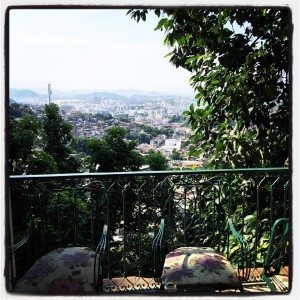 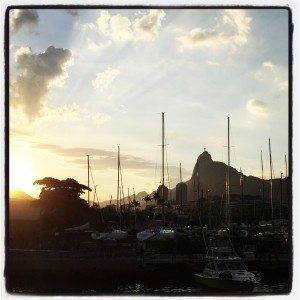 One night I got lost on my way to a digital nomad meetup. I walked around for 1,5 hours, completely disoriented, crossing areas and alleys you probably shouldn’t walk in this dangerous city. However, I did not feel scared for a second, only frustrated that I could not use my phone’s navigation for fear of showing my phone. Then I ended up in this lovely peninsula called Urca (still the wrong place, by the way). Witnessed the most amazing sunset over Rio, with Christ the redeemer in full view. Heard locals, dressed in white, sing a beautiful tribute with offerings and candles on the beach. And met some really nice people. In the end I took a taxi and finally joined the others. But I would not want to have missed this ‘detour’. Sometimes life’s detours bring you the most cherished gifts…

If you want to experience the real Rio de Janeiro, go on a tour with Fabio Rondinelle. He is an ex-drugsdealer from the favelas who is now helping street kids to stay out of the drugs, crime and gangs. Fabio is a real nice, good person, who knows everybody in the favelas. Even Madonna came to visit him twice, but he is still struggling to make an honest living. His tour on a motorbike is legendary: he takes you through the narrowest of streets and to places where nobody else could/dare go. Part of the tour proceeds go to Fabios projects. Help him, the kids and have yourself an unforgettable day, for just 150-200 Reais.

Bjorn and I gave another presentation on the rooftop of the Space coworking center. Two beautiful old houses joined into a myriad of rooms and spaces. Homemade lunch is served daily. A nice place to meet locals and traveling entrepreneurs.

My last night in Rio I went to a restaurant with traditional Forro music. I did not know the dance at all, but it sounded so happy. I was watching the unknown moves and felt too scared to try. At midnight somebody dragged me onto the dance floor. Two hours later the place closed and the music stopped. My cheeks were flushed, I had a big smile on my face, I wasn’t tired at all. I could have continued all night. Now I remembered that dancing made me so happy.

My next stop was Buenos Aires in Argentina, which I turned into a ‘Tango Challenge’…

Watch them before you go or – better even – while you are there: