“Visibility: that which makes us the most vulnerable is also the source of our greatest strength”

I have been featured in more than 500 interviews in 10 countries over the past 20 years. As a journalist I also wrote hundreds of newspaper and magazine articles.

Many of these publications were in Dutch or other ‘weird’ languages such as Afrikaans, Portuguese, Spanish or German. You’ll find the publications in English below. 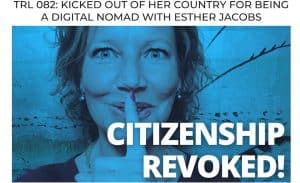 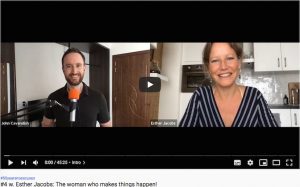 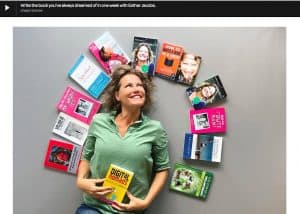 “You are a producer’s dream. Your interview has the richness and complexity
(as well as lots of information) that we aim for in the show.”

Esther is invited as expert on the ‘Be A Bestseller 3.0: Structure Your Story For Success‘ summit, an interview-series that helps you become the writer you want to be. January 2022.

Esther shares her secrets in the  ‘Fabulous after fifty’ podcast at TheKennedyConnection.com. 13 August 2021.

How can Curaçao position itself more attractively for digital nomads? Esther gives a presentation for the Government of the Caribbean island (introduction in Papiamento, Esther’s speech is in English). March 2021.

‘Life in Permanent Beta’ An unusual interview on the podcast ‘Self portraits as other people’ by the one and only ‘ungoogleable Michaelangelo’, who also happens to be my brother… 10 December 2020

Esther shares her energy management tips in an interview for e-book Energy, Body and Mind of Future Females. October 2020.

Interview in Podcast ‘Kicked out of her country for being a Digital Nomad with Esther Jacobs‘ and Mitko Karshovski. thatremotelife.com. 8 September 2020.

Interview in Ebook  ‘Remote work – Case studies: How These 14 People Escaped The Office, Earned Income Remotely, And Found Likeminded People All Over The World’. Fleks.co. August 2020.

See and seize opportunities. Esther explains how to find more freedom in your life, no matter the external circumstances. Campus Party NL. 9 July 2020.

Esther shares her ‘speaker secrets’ and more at this podcast. The Location Independent Startup Show. 1 July 2020.

Interview ‘Find Your Freedom with a ‘No Excuses’ Philosophy‘ on podcast www.powertolivemore.com. Nov 2019.

Esther is one of the most inspiring digital nomads according to this blog ‘vrije meid’ (in Dutch). Vrijemeid.nl. October 29th, 2019.

Interview ‘Write the book you’ve always dreamed of in one week with Esther Jacobs‘ on podcast ‘Misfits & Rejects’. October 2019.

How Esther went from Knight to outcast by friction with the Dutch government is used as an example in the book ‘FRICTION: The Untapped Force That Can Be Your Most Powerful Advantage‘ by Roger Dooley, published by McGraw Hill. May 9th, 2019.

‘Trusting your Intuition for Possibilities in Travel‘. TransformViaTravel.com, June 1st 2018.

Real estate in Amsterdam Esther shares her experiences and tips in the 80/20 Investing show by David Schneider (author of the bestselling book The 80/20 Investor ) and Angela Matthews (founder and marketing director of the Happy Investor Method). April 14th, 2017.

“How I got fired from my country for traveling too much” featured in TMBA’s year review. Dec 2016

Could You Become a Digital Nomad? BRAINFLUENCE Podcast on www.rogerdooley.com. August 4th, 2016.

Why is a Dutch knight an advisor at The Entrepreneur House? TheEntrepreneurHouse.com. July 2016.

Launch of Digital Nomads; a guide to live, work and play around the world, February 2016.

‘No excuses lady’ to mentor women at EO event. Article about Esther as mentor at EO event in Qatar. Tribune News Network, Doha, Qatar. May 5th, 2015.

No excuses, lady! Review about my book ‘What is your excuse?’ in blog Upgradeyou.nl January 5th, 2014.

Giving is the new having Column in VCV Magazine. December 2012

Entrepeneurs to watch out for in Amsterdam, Netherlands Blog at Directly.me about Esther Jacobs. February 2012

33 entrepreneurs who make this world a better place by IDEAMENSCH. I am honored to be in this list! January 11th 2012

Nothing’s Impossible-Inspiring Stories that Prove It My motivational story has been published in this American book. August 2011

About Esther Jacobs and her books on www.eyesin.com, issue no. 8, June 2011

Interview How to live the life of your dreams, April 12th 2011 www.soulkissestv.com

Radio interview on “The Way of the Toddler” show about my no excuses mentality, Toginet Radio, November 9th 2010

Coins for Care, or how I raised $25 million for charity Published as a chapter of the Power of Philanthropy book, November 2010

‘Six secrets for living your dream life’ Published as a chapter of The Speaker Anthology Book, October 2010

What is your dream? VCV magazine, November 2010

Interview about ‘Survivor’ and ‘no excuses mentality’ on ‘Read my lips with Bonnie D. Graham aka RadioRed on BlogTalkRadio, July 19th 2010

Interview about the 5 weirdest travel destinations on www.nodebtworldtravel.com, July 19th 2010

Budget Travel Tips from the NO EXCUSES lady from the Netherlands on Positively Parenting site. July 2010

Interview on The Bob Cudmore Radio Show, New York, about ‘NO EXCUSES!’ mentality. May 19th 2010

Everything is possible if you really want it. Antwerp Gazette, Belgium, December 1st 2009

If you really want something, there’s no excuse Sante Magazine, November 2009