Living as a Digital Nomad in Buenos Aires for a month in 2015/16 to learn to dance tango.

My first visit to Argentina was in 2004 (only in Dutch). I was a backpacker then, doing the ‘touristy thing’. This time I returned as a digital nomad, to live in Buenos Aires for a month and learn to dance tango. I can summarize my month in 4 words: walk, work, eat and tango.

Within my first 30 minutes, three stories presented themselves:

1) A taxi-agent at the airport tried to rip me off, by quickly swapping a US$50 note I had given him for a US$10 note and telling me I must have confused the two. But I insisted that he was the one who had made the ‘mistake’ and suddenly, without an explanation, he took the US$10 note back and gave me the change for the US$50. As he walked away, I quickly calculated he gave me the wrong exchange rate and called him back. He then gave me the rest of my money and left. I could not believe it: did he just try to rip me off again, just two minutes after I caught him the first time?!?

2) The taxi driver just smiled and told me this happens all the time. As I was still recovering from the shock (first time this happened to me in many years and 100+ countries of traveling), the road was blocked by hundreds of police in riot armor. “What is going on?” I asked. My driver explained that a company at the airport had recently laid off many workers and then refused to pay them. No wonder the ex-workers were protesting and had been blocking the airport for a week already. The police had just cleared the road. They did not look friendly…

3) As we continued, I saw that the taxi’s gas tank was beyond empty and I asked the driver if we should get some gasoline for the long drive into the city. Again he just laughed and told me his car -like many others- had been modified to use gas. They just change the engine, but the display stays that of a ‘normal’ car. 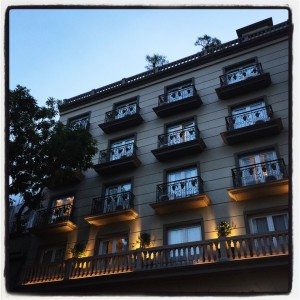 When I finally I arrived in my lovely Airbnb place; an artist residence with a huge creative studio and nice people, I found that none of my plugs and adapters fit; all power outlets were completely ‘alien’! I had to but an adaptor… So far for being an ‘experienced’ world traveler and digital nomad…

Buenos Aires feels very European, with Italian restaurants, sidewalk cafes etc. There is free Wifi in most of the city, especially in Palermo. Nothing fancy, but just enough for a social media check, google maps, whatsapp etc. I love the trees in the streets; gives it a very ‘green’ feeling. 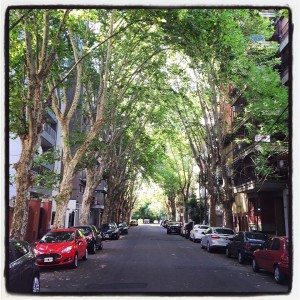 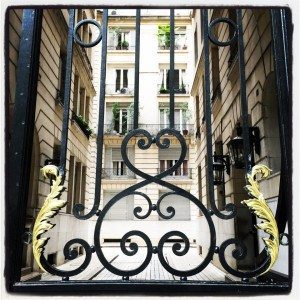 I found the summer to be very hot. If you don’t have air conditioning, it’s hard to support.

Compared to Rio, Buenos Aires felt less dangerous, even though they say that you have to be careful. I felt safe enough to walk the deserted streets of Buenos Aires the night of a Christmas dinner, while talking to my dad in Miami on my phone. Then this weird looking guy approached me, but I shrugged him off. He kept following me, trying to get my attention and talking to me. Annoyed I quickly told him in Spanish that I was on the phone and continued to talk to my dad. The guy kept following me, pointing to something in his hand and talking about money. He was really irritating, so I told him he was being rude, since I was clearly on the phone. He had a surprised look on his face when I walked on. Only a few blocks later I realized that the guy might have been trying to rob me! Just because I wasn’t paying attention it was a bit hard for him to scare me. I did not even take a proper look at the ‘thing’ in his hand, haha!

There is this saying: ‘what you pay attention to, grows’. Apparently it also works the other way around. Anyway, I prefer to focus on the beautiful things in this city.

Wherever I am, I always try to work a few hours a day, preferably in a nice café or restaurant. I found so many nice places where I could grab a bite to eat while working on my laptop and watching people go by.

I liked the chain Tea Connection, with healthy food and of course great teas.

I also went to Croque Madame a few times: the café with a ‘secret garden’ of the Museo Nacional de arte decorativo in Belgrano. 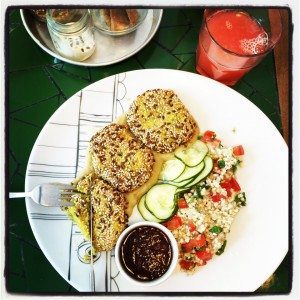 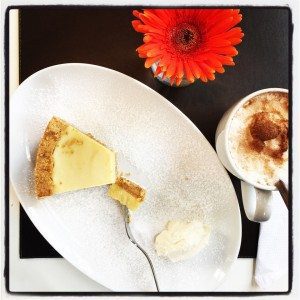 One night I gave a ‘No Excuses!’ presentation to local entrepreneurs and expats at the beautiful Sercles coworking space. As an experiment, the presentation was broadcasted live on Periscope. Watch the video of the presentation to understand why “you can’t stop the waves, but can learn how to surf…”

Do you want to stay focused, energized and get a lot of work done? Drink yerba mate, like the locals do. Argentinians make it into quite a ritual, but you can also just buy the herbs in the supermarket and add hot water (not boiling!), just like any other loose geen tea. They say mate has the “strength of coffee, the health benefits of tea, and the euphoria of chocolate” all in one beverage… 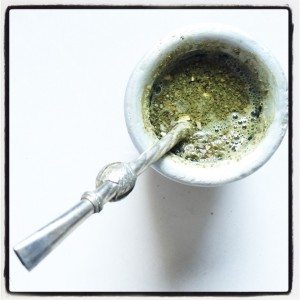 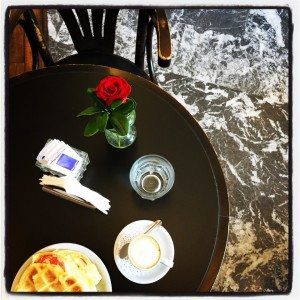 One night I drank so much mate and was so happy with my life in Buenos Aires, that I recorded a video, just when I was leaving a tango place at 3.30 at night… The video is in Dutch, but you can see my energy and happiness, and get an impression of the city at night without understanding the words.

When you are in Argentina, of course you have to try one of the many great ‘parilla’ places. I liked Las Cabras, also a nice place to meet and watch trendy local young men, haha.

Blisters on my feet, a smile on my face and a new love in my heart: TANGO! 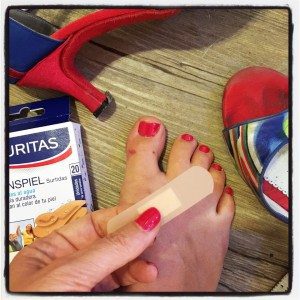 I found private tango teacher Adrián Héctor Luna online and he came to my house every day, for three weeks to teach me the basics of the dance, but also to share his passion for the music, history and culture. Anyone in Buenos Aires: treat yourself to private dance classes! 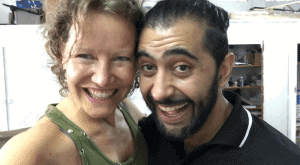 I learned so much more than just the dance. Read my blog ‘life lessons from tango’ if you want to learn more about this.

There are many places to learn tango. Why not go where the locals go? La Viruta is a huge place, where they give various dance classes at all levels. With the students from your class, and others joining in later, you then practice. A great place to start. Once inside; they’ll give you the option to buy ‘cuponeras’: discounted entry tickets. After my first few private tango lessons, I went to La Viruta almost every night. Very friendly, low key; I would recommend this place to any visitor. 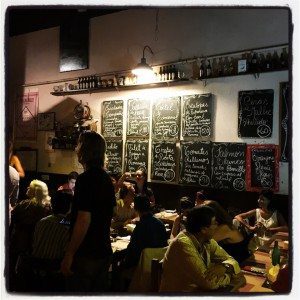 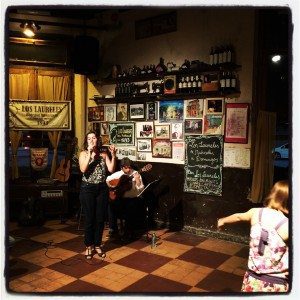 There are also many underground milongas. Just go to one place and you’ll get invited to the next.

Even if you don’t dance: soak up the culture during a night out. I enjoyed great food, music, dance and people in an authentic Buenos Aires tango place: Los Laureles, where the famous movie ‘Fermin, Glorias del tango‘ was filmed. Watch the movie first and then you’ll recognize the space, the pictures etc.

There is so much more to say and do in Buenos Aires. The best way to find out is just to go there…