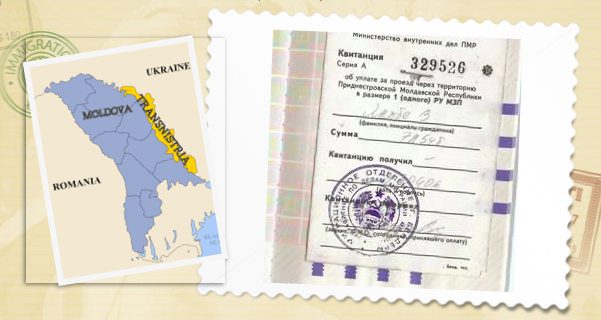 Trip to a ‘non-existant’ country….

During a trip to Moldova in eastern Europe I visited Transdnistria: a country that officially does not exist.  Still, it appeared quite real, with its own border, customs, uniforms, police, language, money, stamps, etc.

15 years ago Transdnistria separated itself from Moldova (500 people died during the ‘war’). Nowadays Transdnistria  is a living open-air museum of communism. With the greatest attribute: corruption.

At the border, an officer took me to a small room and gestured with a serious face that I had no visa and therefore couldn’t enter the country. “No wonder I have no visa, because your country does not exist!” I wanted to say, “and there is no embassy where I could have applied for a visa” but that did not seem like a good idea at that time. Moreover, the official I was dealing with spoke only Russian, so we could not understand each other anyway. He tried to explain that I could not enter the country (unless I would pay some money of course) and I continued to smile and pretend I did not understand. Eventually, this relatively inexperienced guy let me go.

Because I did not pay, unfortunately I did not get the coveted stamp of a country that does not exist in my passports. I had to make do with a sheet of paper.

I saw Soviet buildings, Lenin and Stalin statues, many soldiers and police, but unfortunately there was a ban on taking pictures … Actually, apart from the stamp, I don’t even have “evidence” that I have been there!

I wanted to eat something in a cafe and then found out I couldn’t pay with the Moldovan money I carried. I had to go and exchange money into a currency I would never be able to use again.

You can also buy stamps in Transdnistria. However, if you would glue them onto an international letter and mail it, it would never arrive, because the stamps, like the country, are not officially recognized…