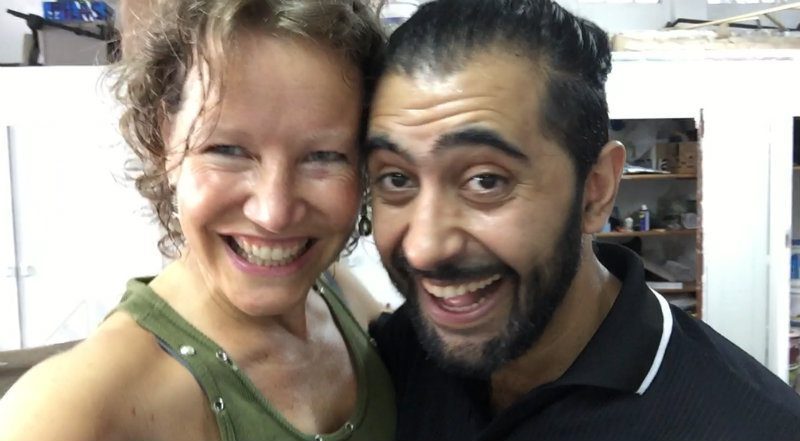 When I hired a private tango teacher in Buenos Aires, I thought the daily lessons would teach me the dance. Never could I have imagined that I would also get profound insights into my own psychology. In the end I discovered that tango is a perfect metaphor for life. This blog is rather long, because I have so much to share! 😉

My head in the clouds

I have always been more of a thinker than a physical person. As a child I never seemed to be able to catch a ball thrown at me during games; I therefore decided I did not like sports. Neither did I like discos, clubs or dancing; people showing off their physique in codes I never quite managed to understand. On top of that I have no sense of direction and find it challenging to stay ‘grounded’. So it was kind of a miracle that I fell in love with salsa and merengue when I lived in the Caribbean for a few years in my early 30s. Since I never had dance classes, I did not know the ‘official’ moves, but I learned to compensate by using one of my strengths from other life areas: improvising. I loved this challenge of learning something new and apparently difficult. My dance partners complimented me for being able to dance without any training. I enjoyed being led by a man. Dancing was the only time that I did not have to think and be the ‘strong, independent woman’ I normally was. Dancing forced me to be in the moment. Not thinking, just feeling. Knowing the next move before my dance partner even initiated it. The flow that was thus created, felt like magic… For years I danced my own weird salsa and merengue whenever I could; mostly on the Caribbean island of Curaçao, and also while traveling in South America. But then I returned to Europe. Occasionally I would go to a salsa club, but found the atmosphere there much more competitive. Everybody seemed to be watching and judging everybody else. My daily, rational self loves competition and can face any challenge head on. But my other, more vulnerable side, the one that I apparently use while I am dancing, did not like it; did not understand this atmosphere. Wasn’t dancing supposed to be enjoyed? I got more and more insecure and was afraid to ‘let go’. The more I was thinking, the worse my dancing got. I stopped going to dance clubs and before long, I stopped dancing at all. I convinced myself that I did not need this dancing thing. That I did not even miss dancing and the exhilarating feeling it used to give me… Work also made me happy. I am very good at what I do and it also gets me into a sort of flow, so I decided to focus on that. Almost ten years passed. I got into in a car accident, resulting in a whiplash that limited my physical and mental capacities. Before long I had worked myself into a kind of burnout, leading me to reconsider my life’s choices. I had focused too much on my rational, male side and given too little room to my emotional and female side. I tried to open up; I was convinced that would lead to a more balanced me. But I attempted to do so in the only way I knew: in a rational, serious modus. I went to see a coach, took food supplements, ‘forced’ myself to do meditation, attacked this ‘thing’ with a vigor. Unknown to me at that time, I applied more of what had caused my problems in the first place. But I did not know any other way. Apart from some yoga, there was not much I did to give space to /enable my feminine, emotional side. Just as I started to recover a bit from my physical burnout, I had organized a cruise to Brazil with a group of entrepreneurs. For the other passengers the cruise was one big party; but not for me. I was focused on my group, my workshops, my responsibility to make sure everybody was happy. As soon as we ‘landed’ in Brazil, a weight lifted from my shoulders. Now it was just ME. I decided to relax and have some fun. I did it in the only way I knew: a combination of working and after work fun with some other workaholics. My last night in Rio de Janeiro, I ended up in a restaurant with traditional Forro music. I did not know the dance at all, but it sounded so happy. Should I? Some others were dancing, but I was watching the unknown moves and felt too scared to try. At midnight I decided I probably would not enjoy it anyway, and I was tired by the way, so I would go home. At that moment somebody dragged me onto the dance floor. I had to focus all my attention on trying to find the right moves. My body remembered before my mind could catch up, so I stopped thinking. Two hours later the place closed and the music stopped. My cheeks were flushed, I had a big smile on my face, I wasn’t tired at all. I could have continued all night. Now I remembered that dancing made me so happy. Why had I not danced for so long?

The next day I landed in Buenos Aires. I Googled ‘tango teacher’ and sent a message to the first website that came up. Then I went to see the tango show in San Telmo. I was very impressed. At that time I thought this was tango:

A few days later I met my teacher Adrián and he explained what tango was really about. Not these bold moves that are mostly made for the outside world, but a very deep connection to the music, to your body, to your dance partner. Adrián showed me this video and I was hooked:

For three weeks Adrián came to my Airbnb place and gave me a two-hour lesson, every single day. I would spend my evenings (at his instruction) taking a group lesson and practicing in one of the tango clubs. The main focus was on the embrace, my ‘presence’ (=mindfulness) and on what I was feeling. No figures, no steps, just feeling, experiencing, doing. Adrián could immediately tell when I switched back to thinking and alerted me so I could try to let go again. After a while I also started to notice when I was ‘in my head’ and when I was in my body. Every day I was (re)discovering my female energy and the relationship between the male/female. Tango forced me to let go, to stop thinking and to let the feeling take over. It was hard work, but we also had a lot of fun. I found back my pleasure and confidence in dancing:

The famous 80-20 rule also worked for me in tango. During the first 10 days, I made amazing progress. My teacher was also impressed: “from zero to dancing tango in such a short time; unbelievable!”. But then we had to focus on the areas that needed improvement: my balance, my presence etc. Meaning a lot of hard work and practice, with less visible results. I am used to delivering 80% of the results in 20% of the time, and usually, that is when I move on. I have tremendous respect for people who can then use 80% of their time to dot the I’s and cross the t’s. But I am not used to this phase/process. I am used to working with my strengths, which requires relatively little energy and delivers great results. Now I was forced (or I had chosen) to continue past the 80% mark. And it made me feel very insecure and confused. Having to WORK for something, doing exercises, to get the details right, it felt so not like me. When I just started my private classes, I considered making it into a 21-day challenge: ‘learn tango in 21 days’. Turning it into a ‘project’ appealed to my rational side. That is something I can handle. But I wasn’t prepared for the ups and downs that would follow. Towards the end of the three weeks, my teacher suggested I go to other, more advanced milongas, but I did not feel confident there. I needed more time. So decided for once in my life not to push myself, but to enjoy. As soon as I decided to stay on ‘my level’ and just work with what I have and enjoy it, I noticed that I got better! Without the pressure of a challenge, I actually enjoyed and advanced at the same time! So far I had only met men who were good and confident dancers. During the dance classes in La Viruta I realized for the first time how hard it is for them to learn the tango. Not only do they have to know both their own steps and the women’s steps, they also have to learn how to lead her, keep an eye on the other dancers on the dance floor, decide on the next move, anticipate, improvise and manage their own confidence. Respect! Learning tango goes with ups-and-downs. There are moments when you feel great; you just had a great dance with a perfect click with your dance partner. “Finally I can dance!” Then you get some feedback or are trying to learn something new or make some mistakes or find a less able dance partner or somebody with whom you don’t have the click and you feel awful. Because you are so vulnerable when you dance and especially when you are learning, these off moments hit especially hard. I talked to many other women trying to learn the tango and we all recognize this. Like in life: if you give up during one of the hard moments, you will never get to the ‘top’. I was surprised to find that the issues coming up during my dance classes, were themes that were also popping up in other areas of my life. To be fully present, for example (one of the main topics of the classes), you have to be grounded, connected to the earth. Your body has to be relaxed, but your feet press into the ground and your upper body rises, thus creating a certain tension, to maintain the communication between your body and your dance partner’s body. All this means that you need to brace your core muscles. If I let go of these and my hips sag, I lose the energy and my dance partner feels like he loses contact with me. This is exactly what my yoga teacher and physiotherapist have been telling me after the car accident. My hips are my weak spot. I have to work my core muscles to stabilize them. My balance also turned out to be very bad, which is related to the hip thing. I knew I had to practice balance, but I did not like to do the exercises. How interesting and frustrating that these issues seem to be the main thing in tango as well…. Needless to say that I learned a lot, and not just about tango. During the entire process, Adrián monitored my confidence, my emotions, my motivation. We talked almost as much as we danced. His support and feedback, the mirror he provided, helped me through the roller coaster of emotions. A small sample of the dance:

Below are some of my lessons, which can also be applied to life in general.

In this presentation, 9 months after the start of my tango challenge, I share my personal journey and the lessons I have learned. And I dance again with my teacher Adrian to show how dancing can affect a person…

WANT TO LIVE, WORK & PLAY AROUND THE WORLD? 🌎

DIGITAL NOMADS IN PUGLIA 🌏 Are you dreaming of