After my writing retreat in Greece, I flew to Tbilisi, Georgia for a conference of the Dynamite Circle (DC), an international community of successful location independent entrepreneurs. After visiting over 100 countries, I was excited to visit a new country. I only stayed 4,5 days, of which 2 were the conference. But our host had organized two day-trips and had booked some great restaurants, because getting to know the famous Georgian cuisine was part of the fun. So I feel like I had a very rich experience in this country during a relatively short stay.

I will share exactly what I did, so you can also experience the best Georgia has to offer on a visit, whirlwind or longer.

I arrived in Tbilisi at night, so the next morning it was a surprise to find that my Airbnb apartment had a nice roof terrace and was perfectly located: walking distance of the city center and still very, very quiet.

Just a few steps from the apartment was a pedestrian street with lots of cafes and restaurants. I found Maria, a local girl selling fresh pomegranate juice, which became a favorite stop every day.

I walk around that first day, explored the city. It’s warm, sunny spring weather, so I wear shorts and a t-shirt. Mistake. Everybody still wears their dark, warm winter clothes and stares at me. It is because they are all orthodox and I am showing too much skin? Or is it because officially it’s still not summer and they only switch to their summer clothes after a certain date? Later I find that even young, non-religious people wear (trendy) black clothes. People don’t make eye contact.

The language is not to be compared with anything. Now and then I hear some Russian. Lots of drinking going on in the streets and behind closed doors. In the plane to Tbilisi there were two men with a plastic bag full of bottles. By the time we landed they could hardly stand up. Welcome to Tbilisi!

I noticed that many people smoke. Taxi drivers smoke in their car. People smoke in restaurants, elevators, even at the airport!

There are many small fruit and vegetable shops in the streets. Everything is incredibly cheap. I got some local money (Lari) from the ATM at the airport, but nobody takes the 100 Lari notes (about 33 euro). I have to go into a bank to change them into smaller denominations. 5 Lari (about 1,5 euro) seems to be the favorite banknote…

I don’t know why, but I count no less that 6 bridal shops in the streets around my apartment. Apparently getting married is a thing here…

There is a lot of traffic: the streets don’t seem to be made for so many cars and traffic jams are common. Some people try to avoid the streets completely between 5 and 8PM. To my surprise I find that cars actually stop for pedestrians crossing the road. Try that in Italy, or Miami or many other places….

Architecture in Tbilisi is a mix of Asian, European and Soviet. The houses are a mix of dilapidated, once grand, buildings that have been repaired with bits and pieces, minimalist Soviet architecture, and modern glass buildings. 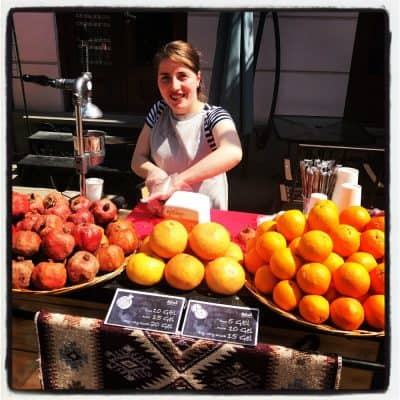 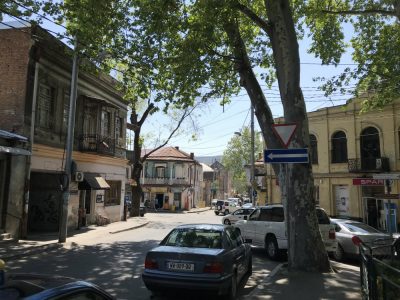 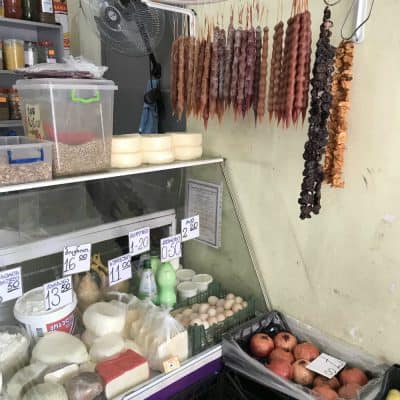 Georgia is famous for its cuisine and I now know why. It is a mix of Asian and European cuisine, using lots of spices, fresh local ingredients, great bread, lots of veggies, walnuts and a lot of pomegranate.
The first night our group meets at Lolita, a trendy restaurant/bar in an upscale area. The food is amazing. Try the artichoke soup with roasted chopped hazelnuts: to die for!
Don’t forget to pop in the Rooms Hotel across the street, a very trendy place, beautiful decorated. You can just go in for a drink, a cup of tea or for dinner.
The best Georgian food was in Shavi Lomi. The restaurant looks like a Georgian family house. The neighborhood looks kind of like you wouldn’t expect a great restaurant to be here. But it is! There are no signs outside, but just follow the locals inside… There are separate rooms with big tables and a garden / courtyard where you can enjoy warm evenings. And the food, the food! Definitely try the small crispy pancakes with potato filling and chili paste on top. And the chicken or vegetables in a creamy, spice walnut sauce. And the Georgian salad of tomato, cucumber, onion and a sauce of ground walnuts. I think everything here is good. We ate till we could move no more. And then brought the leftovers home and had them for lunch the next day…

While I was at Shavi Lomi I looked up a Georgian restaurant in Amsterdam to repeat this experience next week. I swore I would eat nothing but Georgian food for the rest of my life.

Our last dinner was on top of a hill with the fake ‘Eiffel tower’ that can be seen from anywhere in the city. You ride the funicular to the top. There are two restaurants, one with kind of ‘fast food’ and the other one with amazing local food. The views over the city were breathtaking. By the way, the café at the bottom of the funicular is really nice as well. I had tea with a delicious huge home-made cookie there, waiting for my friends. Not a smart move, by the way, considering the amount of food that would follow…. 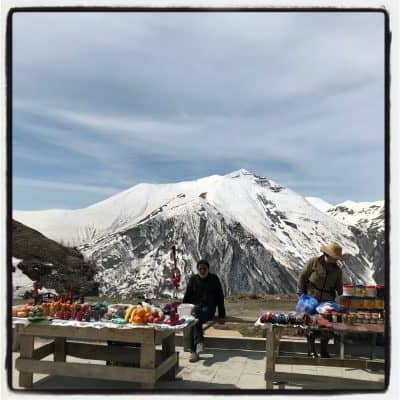 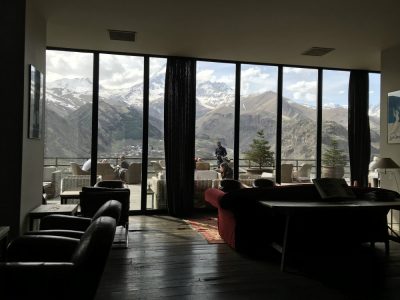 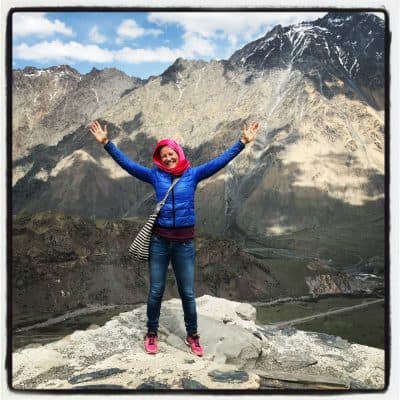 Impact hub is the co-working space where we had the conference. It is very conveniently located in Fabrika: a popular, modern complex with bars, restaurants and shops. Evenings and weekends crowds of trendy people gather here. During the week it’s a nice place to hang out on a terrace. Or get some work done, of course.

About 4 hours by minibus from Tbilisi gets you to the beautiful Kazbegi mountains. There’s skiing here in winter. Even now, at the end of April, there’s still snow in some places. The mountains offer nice hikes in the summer. The ride there has lots of stops to break the journey. You pass small villages that in winter are completely isolated. People there live a hard life, surviving on potatoes, flour, wine and wodka (chacha).
We hiked up to the 14th century Trinity church. It was pretty strenuous, also considering the elevation of 2500 ft, but absolutely worth the effort.
Then we had lunch in the beautiful Rooms hotel with stunning views. I would love to come back here one day to laze for a few days, or maybe organize a writing retreat: this place is so amazing.

Another day trip combined two ‘sights’: the Stalin museum in Gori and the Borjomi mineral springs.

Stalin was born in Gori, Georgia, and is still revered here. It was really weird to visit this museum in which a dictator, who killed millions of people, is portrayed as a hero. I left feeling slightly nauseous. This is not OK! The experience is best described in this article.

It sparked an interesting discussion among our group about how our museums and versions of history might also be biased.
The Borjomi mineral springs are located in a beautiful, green, hilly area. The village has a few shops and restaurants. This is where the famous Borjomi mineral water comes from. We had lunch at the upscale Crown Plaza hotel. Then we hiked down a steep hill, through beautiful forests, to get to the mineral spring baths. I had hoped for a hot bath, but it was actually only lukewarm. The hike back up the hill warmed us back up though.
The ride back to Tbilisi offered spectacular views of the countryside, villages and mountains. I saw many older locals herding their cows in the street. The sunset provided beautiful light and different shades of golden and green on the countryside.

Bye bye Georgia, you enchanted me with your friendly people (the people I met in restaurants and shops, not on the streets), great food and beautiful countryside! 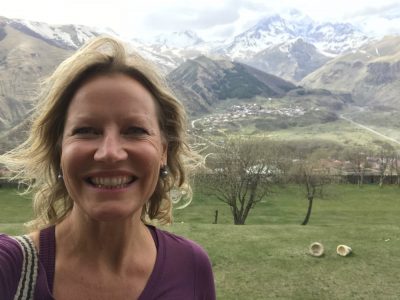 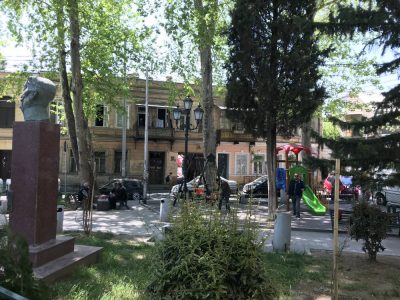