A long walk to freedom

During my two previous visits to South Africa, I did not go to Robben Island, where Nelson Mandela was kept as a political prisoner for 18 of the 27 years he was imprisoned. I had read his book ‘Long walk to freedom’ twice and was immensely impressed with his story, but I somehow thought the tour would be touristy and not add much to what I already knew. How wrong had I been!
This time, as I was having lunch near the ferry, I felt an intuition that I should go. Especially when somebody mentioned that the ex-prisoners who are now tour guides are getting older and might not be around for many more years. Their personal stories and experiences are of course what makes a visit so special.
Note: you have to buy your tickets several days in advance, since it is a very popular tour. I have been told that the V&A Waterfront, where the ferry leaves, is the most visited tourist spot in all of Africa!
So I bought a ticket at the small Robben Island museum and I was immediately impressed by the video messages of ex-prisoners.

(2016) The boat ride to the island was nice, although a bit windy. I did not know that when political prisoners were taken to the island years ago, they were kept in the lower parts of the ship, shackled and unaware of where they were going and what would happen. Can you imagine? One of them told me “we thought they would open the doors and just push us out, make us disappear into the sea…”

For us, tourists, it was nice to approach the island, see it getting closer and the mainland further away. We knew it would only be for four hours… 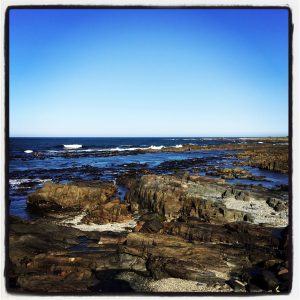 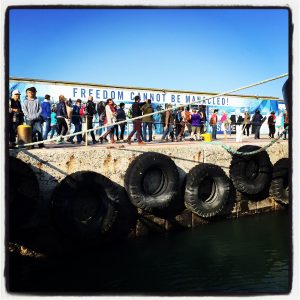 The moment we set foot on the island, I felt a lump in my throat. The emotions attached to the island were so tangible, even after so many years. I learned that before Robben Island was used as a prison, around 1930 it was used as an exile for lepers. People with this illness were forced to leave all family and friends behind and were forced to stay on the island till they died. Husband and wife couples were separated at arrival, because lepers were not allowed to reproduce. I could feel the sadness, loneliness and the enormous burden of injustice still hang over the island. As the bus drove us around, explaining the different buildings, I was silently crying in the back of the bus. I could not stop it; the overwhelming feelings of sadness and loneliness were too strong. I was actually a bit afraid to go into the actual prison; what energy and emotions would I encounter there?
But to my surprise inside the prison it felt different. A quiet, calm, strong power resided there. Patience and perseverance were stronger than the loneliness. Our guide also emphasized that positive side: a lot had been achieved, ex-prisoners and ex-guards were now living next to each other, they had forgiven each other.
He explained daily life in prison and took us to various rooms. In one space the size of a classroom 60 men would be locked up, for years, with only a thin mat and 4 blankets. In the early days the windows did not have glass, can you imagine the cold in the winter as the wind blew through the building? 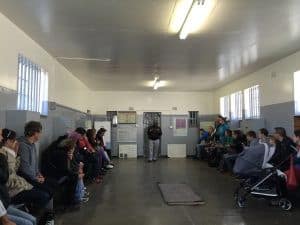 One of us wanted to know what the happiest and most difficult times were during captivity. Our guide surprised us all with his honest and surprising replies. “The happiest times where when we were playing soccer!” he smiled. On Saturdays the prisoners were allowed to play sports. “This was the only time when we could make our own rules and not have to follow the guards rules. I felt free while playing soccer” says our guide with a serene look on his face. Asked for the most difficult times, he quietly said “the family visits” and explained: “you were only allowed to see your family once every 3-6 months, for 30 mins only. Kids under 18 were not allowed to visit (even though some of the prisoners were as young at 15!). The visit was behind glass, so you could not touch your loved ones. You had to speak either English or Afrikaans, so your native language was not allowed. You could only discuss family business, no politics, not circumstances in jail. And even though you felt miserable seeing your kids grow up without knowing you, having friends and family pass away and not being able to be there, talk to them, touch them, you had to be strong. No matter how bad you felt, you had to look strong, for your family would tell everybody outside how you were doing. If you showed one sign of weakness that would discourage the freedom movement still going on on the outside.” 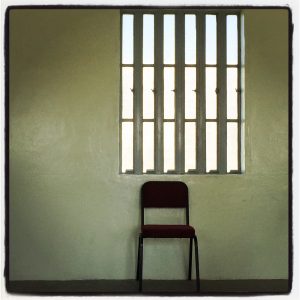 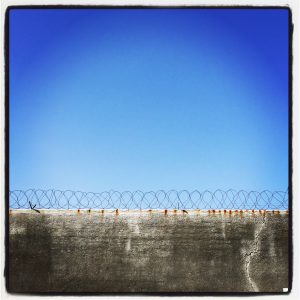 On Sunday the cell doors remained closed as the guards were going to church. Prisoners had to remain inside their cell the entire day. They played a lot of games. Dominoes, Chess and Scrabble were favorites. They sang freedom songs together and shared all the news they could get: letters (heavily censored), outside news from new prisoners, pieces of old newspapers etc. There were also fights. Most fight were actually about … Scrabble! Our guide explains that this was really the most common cause of quarrels between men under immense pressure.
Each night between 8 and 10PM the prisoners would discuss politics. They were from different backgrounds (many were lawyers, doctors, professors, teachers, some had no education and were even illiterate), different tribes and freedom movements. Together they discussed the situation and tried to find a solution. The 18 principles on which the constitution was later based, were developed here. 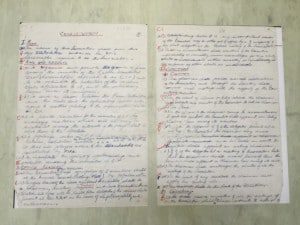 Every day from 7AM to 3PM the political prisoners had to do hard physical labour in the stone quarry. Limestone was excavated to be used for the roads on the island. But even after all the roads had been finished and there was no longer use for the limestone, they had to keep working; carrying the lime from one side of the quarry to the other side, every single day. Thing was one of the things designed to break their spirits. Many prisoners (including Nelson Mandela) got eye problems, lung problems and other diseases because of the lime.
But they made the best of it. They sang freedom songs and secretly taught each other in the cave they discovered on the quarry. They called it their ‘university’, where each educated prisoner taught another one: “each one teach one”. Because of this ‘program’, many political prisoners, who had been illiterate when they had been sent to the island, left the prison years later to pursue university studies.
Where the other prisoners still had each other to talk to and support eachother, Mandela spent 18 of his 27 years of imprisonment alone in a tiny cell. It is unimaginable what this does to a person. In his book he describes his struggle and the powerful lessons he learned. Mandela became friends with most of his guards, who treated him with respect. One of the other political prisoners on the island was forced to live in a tiny house, all by himself and not allowed to speak to anybody, not even his guards, not even to himself. After a few years he slowly started to lose his mind. Human contact is one of the keys to survival. 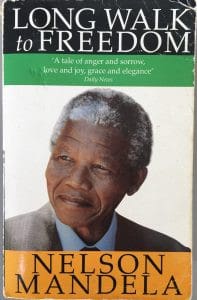 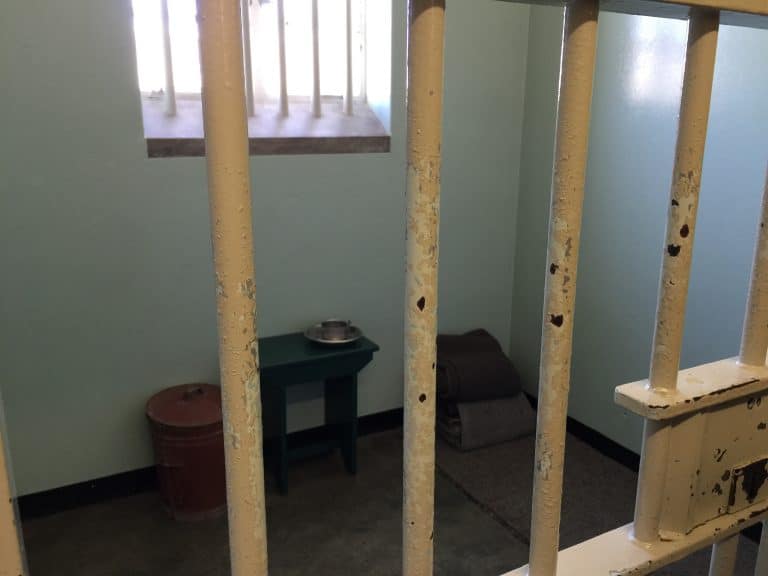 What does freedom mean to you?
Our guide answered this question very powerfully. My friend Jabbo Smulders made a video of this interview.
What is the first thing you did when you were released from prison after so many years?
“Two things”, our guide explains. “The food inside the prison had been very limited. The lack of fruit and vegetables led to scurvy and other illnesses. In the early days you could only get fruit on prescription. But what was the first thing the prisoners did as they were freed? Have a ‘proper’ meal at KFC!”
But there was something else. For years they had looked at Table Mountain. Every day, week, month and year during their imprisonment. It became their symbol of freedom. So when they were released from Robben Island, after their first meal, they asked to be taken to Table Mountain. The Red Cross must have been surprised, but they arranged for the men to be taken to the cable car and up the mountain. They were still wearing their prison clothes. “We could see everything from there” our guide explains. “Robben Island where we had spent so many years seemed so small…” They all swore they would never set foot on that island again. After this, they were taken to Johannesburg to finally be reunited with their families. 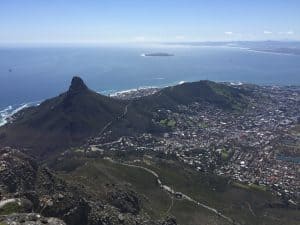 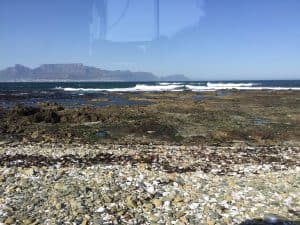 Many years later some of them came back to Robben Island, to work as tour guides. Our guide explains that working on Robben Island has somehow saved him. Other ex-prisoners who now work as guides have similar stories. After their release they carried so much with them that they never talked about. By sharing their stories, they learned to open up. They now live next to ex-guards and have moved on, grown as people and sharing their amazing stories.
Robben Island has been turned into a symbol of the triumph of the human spirit over adversity. On the official website you can listen to several ex-prisoners stories.

To be free is not merely to cast off one’s chains, but to live in a way that respects and enhances the freedom of others.
– Nelson Mandela

At the end of our visit our guide took the time to thank us, foreigners, for the support of our governments. “Without your boycots and other pressure measures, apartheid would have continued much longer. Thanks to you we are where we are today, as equals. But we are not there yet. South Africa still has a lot to learn. We have to maintain what we have achieved and many other people and countries still have problems, so please keep supporting those in need. Because only together we can make this world a better place. So, thank you!” 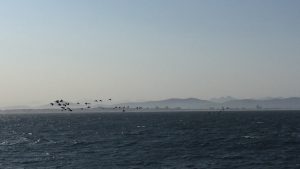 I was so impressed, I needed to record my experience. I made this short Dutch video about freedom. Can you hear the emotion in my voice? 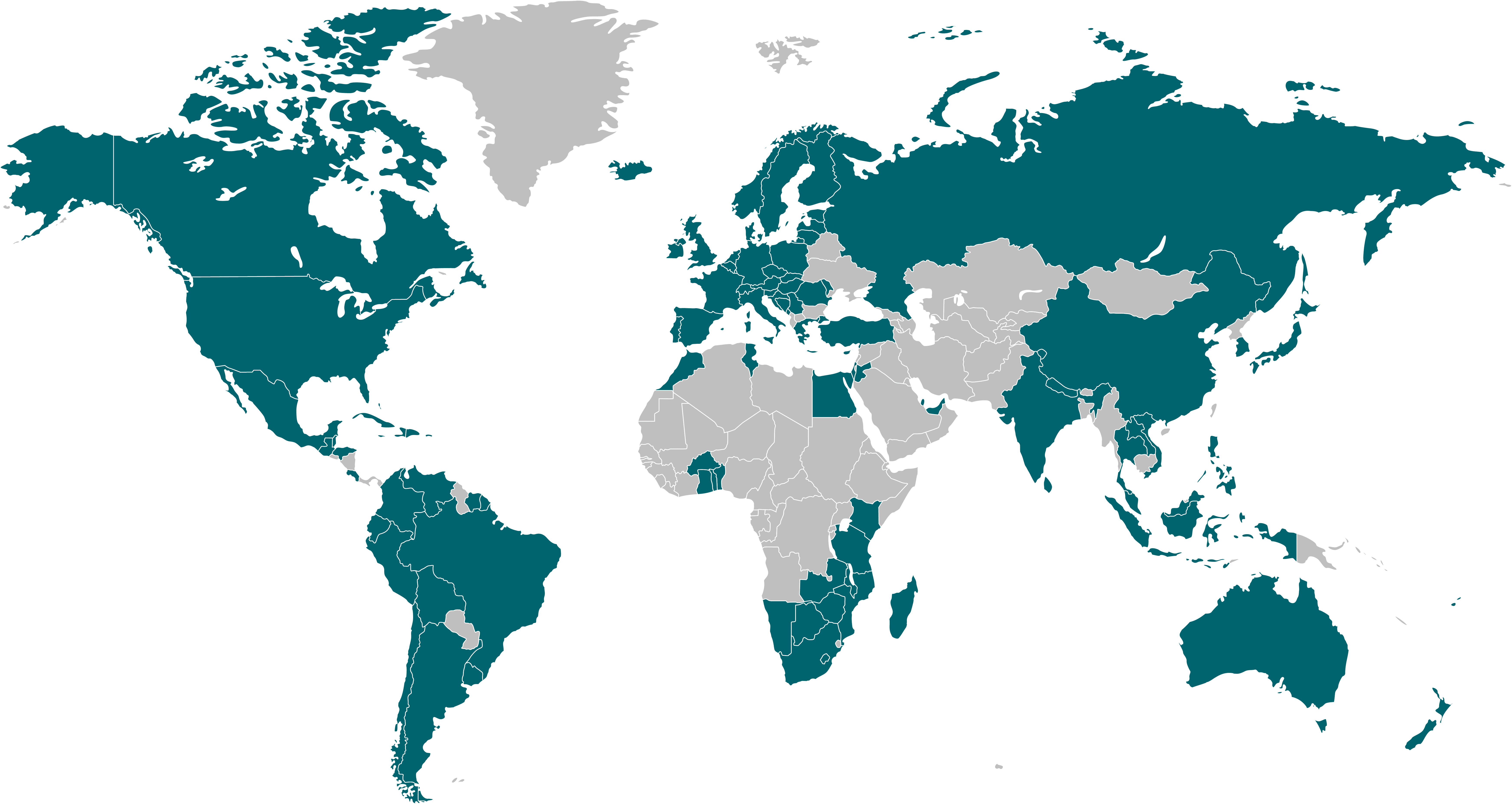