When the Euro was introduced, I collected all left-over currency for charity. The result: €16 million (about $25 million) and the overhead of only 2% made me (in)famous with donors/charities…

In 2002 the Euro was going to replace the national currencies of 12 European countries. It gave me the following idea: What if I collected all obsolete foreign coins for charity?

It sounded like a simple plan. But without money, resources, a network or relevant experience, it was bound to become complicated. Especially for a 28 year old girl.

I started by approaching several well-known charities. They would give me 5 minutes and tell me it was a great idea. They did not think though that such a young inexperienced girl could pull of such a big project. They needed a big name and Esther Jacobs wouldn’t do. I had to find a partner or big sponsors.
So next, I asked big retail chains and supermarkets to put collection boxes for foreign coins in their stores. I was basically sent away. Same thing with approaching sponsors. I needed a different approach…

I decided I needed more expertise. I started researching all details of foreign coin processing, for over a year. Besides knowledge it got me a trusted, international partner who would process, return and exchange all coins for my project. This was the big name I needed! So I approached the charities, retailers and sponsors a second time. Again they shook me off politely. I was about to give up.

Then, suddenly, a well-known company offered to build me a website. To me it occurred that this was exactly what ‘Coins for Care’ needed: presence. It now looked like a ‘real’ organization, which gave me the guts to inform the press. I hand wrote (!) hundreds of letters telling them about my idea. I got zero response…

Despite these setbacks I kept hoping and believing that Coins for Care would be a success, some day….

The breakthrough was a women’s magazine. They were going to interview someone with a novel idea but that person had canceled at the last minute. Would I be interested?

After the article appeared, all national media jumped in. Up to that point, most publicity about the Euro introduction had been very negative. Most people feared that the Euro would hurt them financially whereas government agencies and businesses were afraid of the extra work involved in the introduction. So the media were thrilled with the ‘girl next door helps charities with Euro collection’ story. What really caught on was the fact that I asked people to donate something that did not have any value to them.

As soon as my face was in every TV and radio program, newspaper and magazine, the charities, retail stores and sponsor started to join. Now it looked like Coins for Care was going to be a success, they wanted their share. I was happy to sign them up.

I had traveled to over a hundred countries and had always wanted to help charities. But as a starting entrepreneur I was also looking for a project that would make me a decent living. Having said that, it did totally surprise me how many people want to make big money from charities… 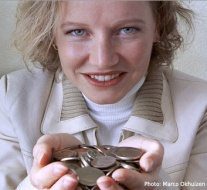 So, the media attention led to a lot of people offering help. All inspired by philanthropic motives, but also requesting percentages of the proceeds ‘to cover their expenses’. All those percentages would add up to so much that hardly anything would be left for the charity itself! Impulsively I decided that nobody was going to earn one penny through Coins for Care, including myself. I would not make any money nor cover my expenses, so neither would anybody else. After communicating this decision 85% of the ‘volunteers’ disappeared. Interesting. It left me with a tiny, but honestly motivated team. And way too much work. We had 4.000 locations for the collection boxes and we needed about 1.000 volunteers to empty the boxes, arrange the logistics etc.

Without resources, we constantly had to be creative. For example we made the collection boxes out of sewer pipes instead of the regular (expensive) promotion materials! Luckily we found a lot of sponsors who helped us out with nearly everything we needed.

Apart from the whole organization I tried to focus on creating free publicity. “Everybody must know that their foreign coins have no value to them, but will help hundreds to charities!” was my mantra. By continuously inventing new angles to the same story I managed to get millions of dollars worth of exposure. For men’s magazines I focused on the money theme. The number of coins, their values, pictures of money etc. For women audiences I focused on the volunteer aspect, my own role as a woman and the help I got. For government media I explained about the fun side of the euro, the unique collection for over a hundred charities etc. I tried to mention as many sponsors and volunteers as possible, to keep everybody happy and engaged.

Then a group of established charities started their own foreign coins collection. Instead of counter acting, I approached them to work together. “You have knowledge of the charity world and experience with collections. I have already arranged the processing of the coins and extensive publicity and sponsoring”. But they did not want to join forces. They started to organize everything by themselves, spending millions of dollars.

“This era needs people who think outside the box, cross borders, and create new possibilities. Esther Jacobs is such a person.”

“Esther is not afraid to move mountains. And she does move them; bare handed, if necessary.”

“Her strong sense of justice makes that Esther does not always choose the easy way. I recognise that from my own work.”

“Esther Jacobs shook up the world of charity. I admire her mission to make charities more transparent and the results she booked.”

Finally, public opinion forced them to work together with Coins for Care. Still they were adamant to hire paid companies for everything that we had already arranged for free! This was such a frustrating time for me.

Anyway, in the end, we collected $25 million worth of foreign coins! Over 140 charities benefited from the proceeds.

Later we found out that the established charities had spent over $15 million in expenses in organizing their part of the collection! Their directors were fired, but the money was gone.

I started to ask questions about charities in The Netherlands. There was no authority or law to monitor charities and protect the donors. I started Holland’s first Donor Organization and turned the charity world upside down, demanding transparency. But the charity ‘old boys network’ did not like my poking around in what had been their ‘business’ for many undisturbed years.

They tried to take the attention away from my transparency message, by accusing me of stealing money from Coins for Care. That hurt as, for 7 years, I financed my charity work with freelance jobs for a big consultancy company.

The positive support kept me going. For a while I got over 200 emails a day from donors, expressing their appreciation. Also I got invited to a meeting of all charities that had benefited from the Coins for Care money. There, the Mayor walked in. He started to talk about role models, model citizenship etc. I had no idea what was happening. Then he asked me to come forward and gave me a very serious looking medal. It took me a while to realize that I just got officially knighted by the Dutch Queen! At 33 I was one of the youngest people ever. 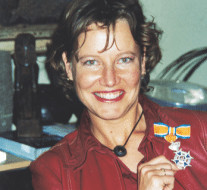 Looking back, Coins for Care gave me a lot of opportunities and it did change my life. I have learned so much by running such a novel and huge project. It also expanded my network immensely. I got to know and work with influential and inspiring people in Europe. It changed my image from ‘the girl next door’ to a well-known young entrepreneur who has realized dreams and contributed to society. For that reason I am frequently asked as a motivational speaker by all kinds of organizations. It also gave me the chance to publish a book: “What is your excuse?”

Altogether it enables me to work only a few weeks a year, to travel the world and enjoy life while looking for new inspiration. Coins for Care has not given me the financial security I was hoping for. What I got out of it is much better. I live a dream life, knowing everything is possible if you put your heart in it and I inspire others to follow their dreams, regardless of external circumstances.