What is your excuse?

No time, no money, no experience, no problem! 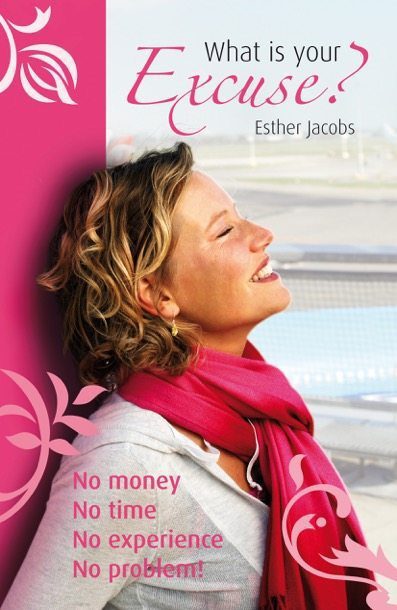 Esther’s first book deals with the excuses people have NOT to pursue their dreams. She participated in ‘Survivor’, raised €16 million for charities and traveled to over a 100 countries. By sharing her amazing personal story, you’ll realize that nothing is impossible and get inspired to take the first step.

“A book that reads like an adventure novel, and that challenges the reader to get off the beaten path.”

Esther has no job, relationship, money, retirement pension, rich family or any other form of security. Still she has traveled over 100 countries, collected €16 million for charity, got knighted by the Dutch Queen, lives on a tropical island and works only several months a year.

In her home country The Netherlands Esther is most famous for her brain child ‘Coins for Care’. When the Euro was introduced in 2002, she collected millions worth of foreign coins for charity. After that she turned the charity world upside down by promoting transparency and starting Holland’s first Donor Organization. Finally she participated in the European ‘Survivor’ TV show and was bullied off an uninhabited island in Malaysia.

Regardless of setbacks and sabotage, Esther keeps on smiling and manages to turn any situation into an opportunity. How does she do that? What can we learn from her?

By sharing her personal experiences, Esther guides us through the ups and downs we all encounter in our lives and businesses. The ‘No Excuses Lady’ proves that anything is possible.

Esther’s first book deals with the excuses people have NOT to pursue their dreams. By sharing her amazing personal story, readers realize that nothing is impossible and get inspired to take the first step.

“Esther Jacobs managed to generate a lot of publicity with few resources due to her integrity and perseverance.  Like myself, Esther’s strong sense of justice leads her to not always choose the easy way.”
Peter R. de Vries (Crime journalist)

“Esther is not afraid to move mountains. And she does move them;  bare handed, if necessary.”
Kluun (writer)

“Our hero. They were so unreasonable to her on Survivor, she didn’t stand a chance. However, Esther stayed open and friendly. How did she manage?”
Linda de Mol (TV host)

“Esther Jacobs shook up the world of charity. I admire her mission to make charities more transparent and the results she booked.”
Morris Tabaksblat (Dutch Captain of industry)

“This era needs people who think outside the box, cross borders, and create new possibilities. Esther Jacobs is such a person.”
Herman Wijffels (Dutch Captain of industry)

“Reads like an adventure story. Inspires readers not to walk the beaten path.”
Santé Magazine

“The book is inspiring, which you should expect from a “make your dreams come true” book, but it has also been written compellingly.”
Susan Smit, Happinez Magazine

“Esther has shown me that problems don’t exist; only challenges do.”
Danielle

“I have quit my job and I am going to start my own business.”
Bert

“I now realize that things won’t happen just like that and that I will have to persevere.”
Iris

“I don’t like books. Got this one for Christmas. Read it in one go. Thanks for the wise lessons.”
Ruud

“The book moved me to tears.”
Angelique

“I have taken unpaid leave to travel around the world – ready for adventure!”
Saskia