My unusual connection with a psychedelic cactus… 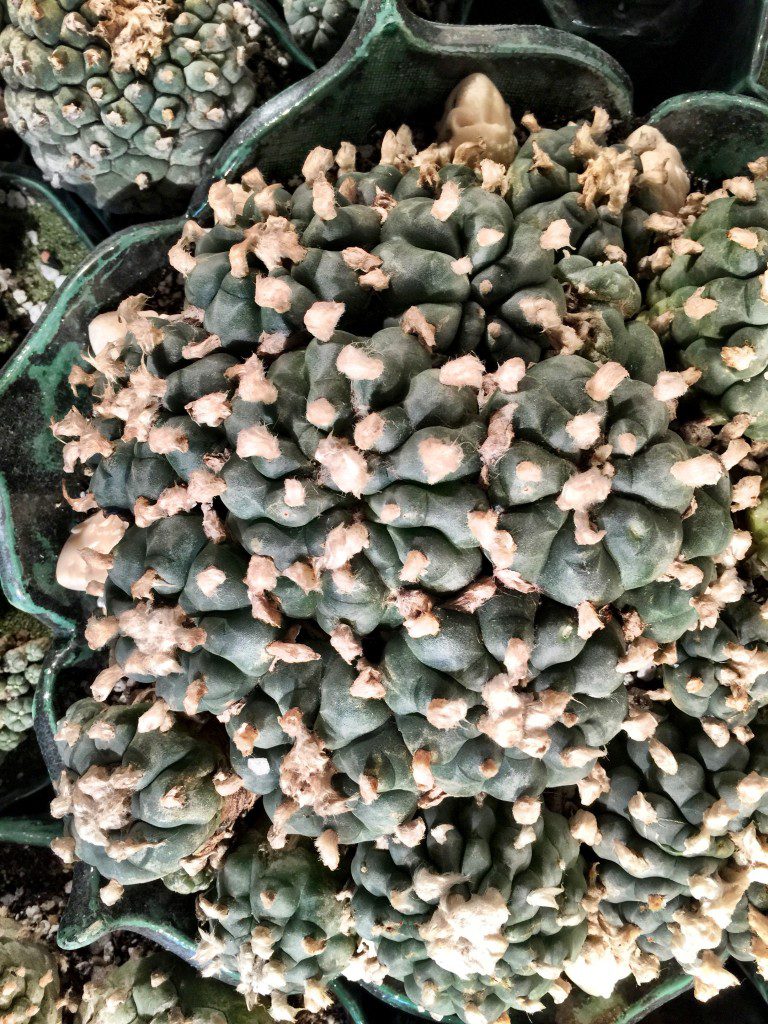 When I told my friend Randall Rodrigues about my weird connection with a group of Peyote cacti in Amsterdam, he said: “So you are like a Peyote whisperer?” I laughed it off, but in the days following his remark I explored this strange connection and concluded that – as weird as it sounds- he might be right. Without ever eating or otherwise ingesting the cactus, even before meeting them for the first time, they seem to have found the frequency to speak directly into my mind… I’ll share the story here. Curious to hear what you think…

In 2007 in Bali I met Menno Philippo, a Dutch blacksmith. He told me about the 40 Peyote cacti he saved from a dealer in The Netherlands, who cut them up in pieces to sell to smartshops, where people would buy them as hallucinogenic drugs. As he shared their story, I became intrigued. The more he told me, the more I started to feel some sort of connection to these cacti, which I had never even seen.

Menno explained that the dealer had been sick for a while and the cacti –stored in a garage- were in pretty bad shape. The dealer practically gave away the Peyote, when Menno offered to take care of them, even though they have a very high ‘street value’, when sold as drugs. Menno had an unusual connection with the Peyote. He promised them he would take care of them and would not harm or sell them. “Normally the babies cacti are cut from the mothers, and they hate that!” he explained passionately.

He also said that the Peyote told him they wanted to live in hexagonal ceramic pots. So Menno took a ceramics course and hand-made 40 pots, exactly according to their instructions.

Then he had to prepare the perfect mineral mix, to achieve the optimal PH value of the soil they would grow in. Menno looked up the minerals in the soil of the Sonora desert and added some other stuff he thought the cacti might need. Then he let the Peyote guide him in finding the right proportions. When he finished he measured the PH and E.C. values and they were exactly right. “The Peyote know what they want.”

“They also have real personalities” he explained to me. “Sometimes they make fun of me, or send me weird dreams” he confided. I had no idea what to think of this, but I was intrigued. I could almost picture the Peyote in their hexagonal ceramic pots at his house, laughing at Menno like Statler and Waldorf, the two old guys commenting on everything that happens in the Muppet Show…

I decided I wanted to visit the cacti and ‘tuned into them’. As soon as I did that, I got the weird sensation as if they wanted to tell me something. It felt like they wanted to connect more to Menno; in my mind they showed me a picture of him meditating with them. I asked Menno if he ever meditated with the Peyote. “No I haven’t,” he answered. “But, you know, I have been thinking about it for a while. There are even some friends who talked about wanting to do that, but we never got around to it.” I made him promise that he would meditate with the Peyote. That was it.

About 6 months later, I visited Menno and the Peyote in Amsterdam. The cacti looked beautiful, and their hexagonal pots were just as Menno had described them. But to tell you the truth, I did not really connect with the cacti. I did not experience some magical feeling or revelation or strong connection. Maybe I had hoped for something like that now that I was physically so close to them?

I only got a vague feeling that they wanted to tell me something about Menno, again. Were they worried about his liver? I asked him if he was aware of any health problems, especially his liver. He said that yes, he knew he had to take care of that.

Another 1,5 year later I had almost forgotten about the Peyote. But when Argentinian water color artist Vladimir Merchensky visited Amsterdam, I felt a sudden urge to take him to Menno. I felt that the two of them – both artists- would really get along. But I also felt the pull of the Peyote again. They were ‘calling’ me! I felt honored and was really curious what they wanted to tell me. 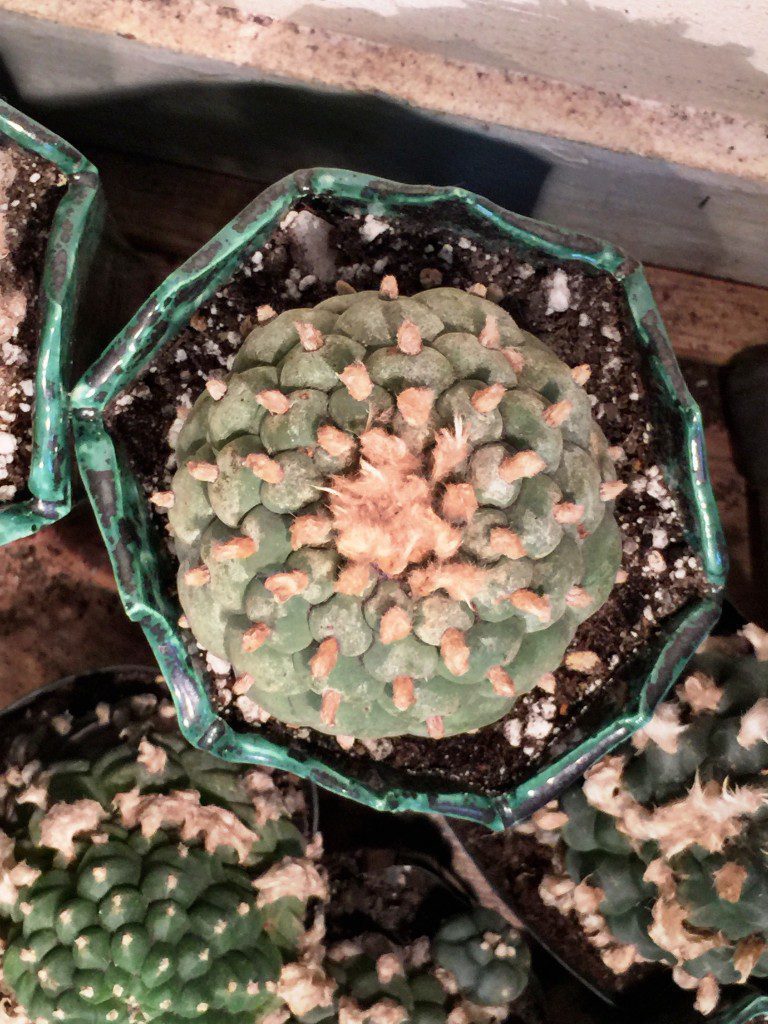 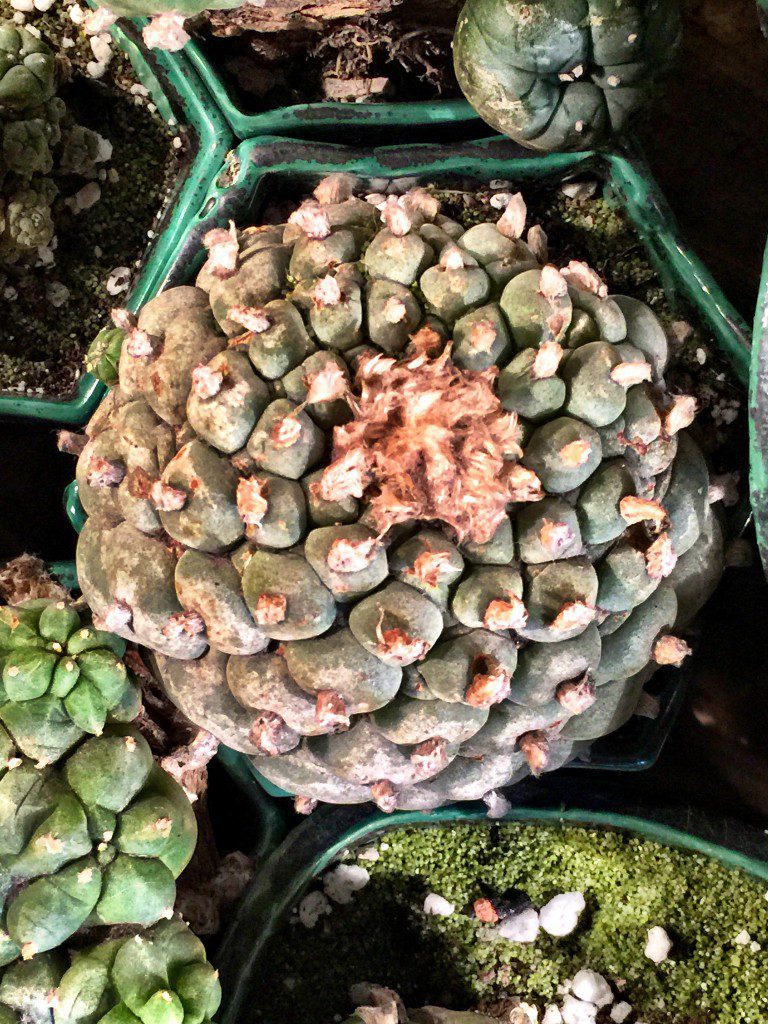 While Vladimir and Menno were getting acquainted, I went to visit the Peyote. Menno had told me they were not active; they were stored in the garden for their ‘winter sleep’. And indeed, they looked very grey and inactive. I was a bit disappointed. I was sure they had ‘called’ me. Did they have an important message for me? I stayed with them a bit, but nothing happened. I only got this weird image of a shape, a diamond like shape. It had something to do with them, but what?

When I told Menno, he got it immediately: “yes, I see, when I store them in that shape, instead of in the straight lines the pots are in right now, they will be able to catch the sunlight better. Say no more, I know exactly what to do!” So the Peyote hád given me a message: they wanted their pots in different positions…

After Vladimir and I left Menno’s house, I felt weird. In one way, it was kind of special that I could receive messages from the Peyote, on the other hand I felt …used. They seemed to connect to me only when they needed or wanted something. There seemed to be nothing in it for me, no personal message, not even acknowledging me as a person, they had just used me to communicate with Menno…

I laughed it off and not thought about the Peyote for another year, till I shared this story with Randall. I told him that I was convinced that you don’t need to ingest the cactus if you want to connect with them. You just tap into their frequency (or they tap into yours). You don’t even need to be near them. He nodded and then proceeded to ask me if I realized that maybe not everybody could do that? The moment he asked if I was a Peyote whisperer, I very strongly felt this special connection I have with the Peyote. I could feel their energy all around me. I felt like they had another message for me. I knew that there was more than what I had experienced so far. I wanted to explore that.

In my car on the way home, I could still ‘feel’ the Peyote energy; I could feel them in my heart. They were asking me, without words, if I wanted to explore. I said ‘yes’ out loud, feeling a bit ridiculous, by myself in the car. They kept pushing: was I sure? (yes), this was not something to be taken lightly, did I understand (yes). I had no idea exactly what else they asked of me, but I kept saying yes, because I had a very deep urge to explore, to connect. I was surprised by their sudden interest in me, because up to that moment I had thought of them as kind of cold, distant, calculating, maybe even a bit arrogant. But in the car, I felt another side. It was as if they were acting as mirrors.

To be honest, I had wanted to connect with them out of curiosity, maybe also a bit as a novelty, maybe even to show off? I had been ‘using’ them, too. Just like I felt they were ‘using’ me. Suddenly I felt my heart open. Tears welled in my eyes. Under that ‘hard’ shell that they had been showing me, mirroring me, there was beauty, softness, love, colors, emotions, molecules, connection…. For a moment, I felt like a veil had lifted. They showed me that when I showed my true self, my inner beauty, my vulnerability, that is what it would feel like.

The next day I was struggling with letting go. Things were happening in my life that I had trouble dealing with. To test out this new connection with the Peyote, I asked them: how do you guys deal with letting go, with cleansing, with processing and transforming stuff that happens? The answer was very short and very clear. A thought came into my mind, as if it was my own thought, but the voice I heard was not mine. I could have never come up with this answer: “We sing” they said. 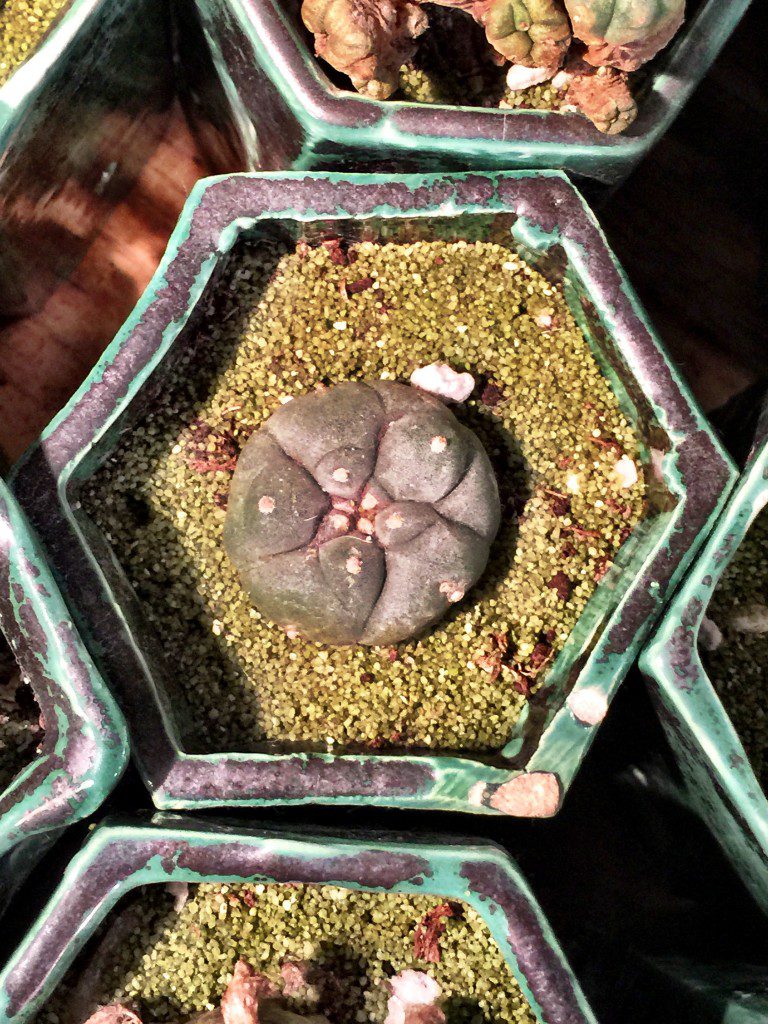 I googled ‘Peyote song’, hoping that somebody had maybe recorded the cactus songs in the desert. But all I came across were native American Peyote songs, that were meant to help the Native Americans go in trance to help them find the cacti. The songs were weird; very high energy, very fast rhythms. I felt that this was not what I was looking for. Why could I not find the songs the cacti themselves sing?

“You won’t find us there [on YouTube]” a voice in my head said; “you will hear us here, in your head” … For a second I heard/knew their song: it was a weird, high pitched voice and the song is kind of ethereal, the most weird and beautiful thing I ever heard. One voice starts and the others pitch in. I can imagine sunset and sunrise in the desert and the cacti singing with and to each other. It was over as fast as it started, leaving me wondering if I had imagined it all…

I am so very curious what else the Peyote can teach me: I want to explore more. But first I would like to ask you: am I crazy? Has anybody experienced anything like this?

This was only the start. After this promise in the car, I have had some beautiful encounters with the Peyote, where they shared their wisdom with me. Would you like to know more? I share my experiences on the Facebook page ‘Wisdom of the Peyote’. Feel free to follow me there.

*No cacti or other plants were harmed in the creation of this blog…. 🙂